The first 15 minutes cover much of the material below. The last 10 minutes are Q&A.

In case you thought JavaScript cannot be used to write reliable, secure smart contracts, we begin with this counter example. 😃

We'll unpack this a bit below, but for now, note the use of functions and records:

Suppose we want to keep track of the number of people inside a room by having an entryGuard count up when people enter the room and an exitGuard count down when people exit the room.

The entryGuard ! use(counter.incr); code in the video uses a proposed syntax for eventual send, which we will get to soon.

The separation of duties illustrates the core idea of object capabilities: an object reference familiar from object programming is a permission.

In this figure, Alice says: bob.greet(carol)

If object Bob has no reference to object Carol, then Bob cannot invoke Carol; it cannot provoke whatever behavior Carol would have.

We refer to these object references as object-capabilities or ocaps.

# The Principle of Least Authority (POLA)

OCaps give us a natural way to express the principle of least authority (opens new window), where each object is only given the permission it needs to do its legitimate job, such as only giving the entryGuard the ability to increment the counter.

This limits the damage that can happen if there is an exploitable bug.

to achieve a multiplicative reduction in risk. 15 min

The examples in this section are written using Jessie, our recommended style for writing JavaScript smart contracts. This eslint configuration provides tool support.

Now, the contents of the package.json file should look similiar to the snippet below.

The details of Jessie have evolved with experience; as a result, here we use (count += 1) where in the video shows { return count++; }.

# Objects and the maker pattern

JavaScript is somewhat novel in that objects need not belong to any class; they can just stand on their own:

We can make a new such object each time a function is called using the maker pattern:

Use lexically scoped variables rather than properties of this.

The style above avoids boilerplate such as this.x = x; this.y = y.

We recommend arrow function (opens new window) syntax rather than function makePoint(x, y) { ... } declarations for conciseness and to avoid this.

By default, anyone can clobber the properties of our objects so that they fail to conform to the expected API:

Worse yet is to clobber a property so that it misbehaves but covers its tracks so that we don't notice:

Any attempt to modify the properties of a hardened object throws:

harden() should be called on all objects that will be transferred across a trust boundary. It's important to harden() an object before exposing the object by returning it or passing it to some other function.

To see how this works in detail, you may want to step through this visualization of the code (opens new window): 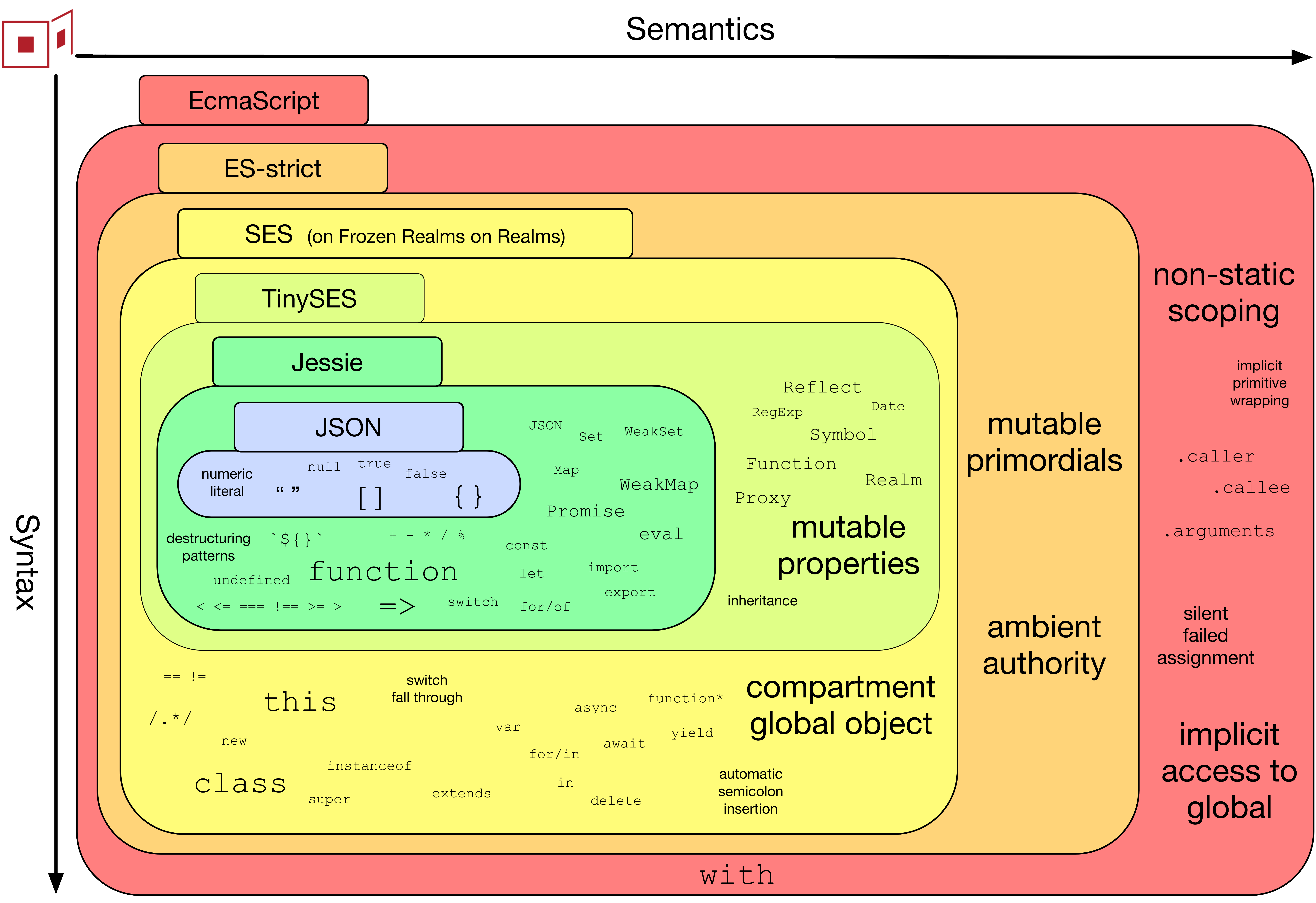 One way that you would notice this is if you accidentally assign to a frozen property: this will throw a TypeError rather than silently failing.

One form of authority that is too widely available in ordinary JavaScript is the ability to redefine built-ins (shown above as "mutable primordials"). Consider this changePassword function:

In ordinary JavaScript, since someone might have redefined the includes method on Array objects, we run the risk of stolen passwords:

In Hardened JavaScript, the Object.assign fails because Array.prototype and all other standard, built-in objects (opens new window) are immutable.

Certain libraries that make tweaks to the standard built-ins may fail in Hardened JavaScript.

A globally available function such as fetch means that every object, including a simple string manipulation function, can access the network. In order to eliminate this sort of excess authority, Object-capabity discipline calls for limiting globals to immutable data and deterministic functions (eliminating "ambient authority" in the diagram above).

Hardened JavaScript includes a Compartment API for enforcing OCap discipline. Only the standard, built-in objects (opens new window) such as Object, Array, and Promise are globally available by default (with an option for carefully controlled exceptions such as console.log). With the default Compartment options, the non-deterministic Math.random is not available and Date.now() always returns NaN.

Almost all existing JS code was written to run under Node.js or inside a browser, so it's easy to conflate the environment features with JavaScript itself. For example, you may be surprised that Buffer and require are Node.js additions and not part of JavaScript.

The conventional globals defined by browser or node.js hosts are not available by default in a Compartment, whether authority-bearing or not:

In compartments used to load Agoric smart contracts, globalThis is hardened, following OCap discipline. These compartments have console and assert globals from the ses package (opens new window). Don't rely on console.log for printing, though; it is for debugging only, and in a blockchain consensus context, it may do nothing at all.

You can create a new Compartment object; when you do, you can decide whether to enforce OCap discipline by calling harden(compartment.globalThis) or not. If not, beware that all objects in the compartment have authority to communicate with all other objects via properties of globalThis.

Type checking JavaScript files with TypeScript (opens new window) can help prevent certain classes of coding errors. We recommend this style rather than writing in TypeScript syntax to remind ourselves that the type annotations really are only for lint tools and do not have any effect at runtime:

If we're not careful, our clients can cause us to mis-behave:

To be defensively correct, we need runtime validation for any inputs that cross trust boundaries:

# From OCaps to Electronic Rights: Mint and Purse

The Hardened JavaScript techniques above are powerful enough to express the core of ERTP and its security properties in just 30 lines. Careful study of this 8 minute presentation segment provides a firm foundation for writing smart contracts with Zoe.